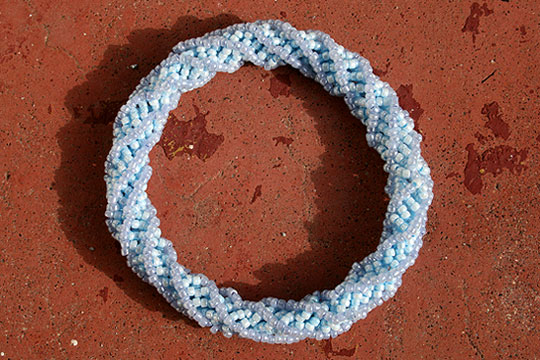 The first kind of bead work I did was a vast number of African Helix stitch bracelets. The instructions came from a book I took out of the local library, and the African Helix stitch seemed the most approachable out of that book, which was not beginner level. Everything else seemed too complicated. Still, having no experience in beading or even stringing at all, it took me the better part of the day to figure it out. It also took my husband helping me, mostly where I tried to skim over the instructions, omit steps that I judged unnecessary. Follow the instructions to a T! Even when they don’t make sense. Chances are there is nothing wrong with them. Read them like you read your Bible. Really think about them.

After starting and cutting up first maybe 20 samples, with my nerves in shreds and my husband fuming and unable to stand me anymore, I sort of figured it out. The pattern consists of three repeats of two color beads. Now it seems very easy, but then, the number of mistakes and the variety of mistakes I made were astonishing. But the real disaster came when the tread started to run out. I tried not to think what was going to happen when it ended, with my bracelet still a mere 3 inches. I knew nobody who could help. The book was vague. And I knew nobody with a three inch wrist.

You-tube came to rescue. They actually had a video of this nice lady tackling my problem, calm and undisturbed, like she ate rats for breakfast. She explained to me that threads end, happens to everybody. Here are the steps you take. And there was a set of pretty simple instructions.

Anyway, after two days of work, I realized I had to end the bracelet. With a clasp. How, nobody knows. Another problem – no clasp. No nothing. What do I do? I joined the raw edges of the bracelet together, sewing through the accent beads back and forth a few times (so you can really see where it happened) and impatiently rolled it on my wrist. It was too tight, I almost scraped the knuckles to blood. Measure your anatomical features and measure your work accordingly.

I was so excited, that I showed everybody my new bracelet, and actually got a few orders for more. However, nobody seemed very willing to pay me for almost 2 days full labor. Even at minimum wage. And it’s the law in California, otherwise Arnold gets upset and breaks something. I would be comfortable working for the kind of money people were willing to pay me if I lived, say, in Tanzania or a far region of Uzbekistan, where people still barter for the most part. But not in Southern California. Still, on the up side, somebody was considering paying me. Good news. Maybe I should move to Tanzania.

That blue bracelet I ended up giving away at a baby shower, to my friend Victor’s pregnant girlfriend. She was expecting her first baby boy. Victor told me she did not take it off for three days. It means she liked it. I was so touched! The baby is about 3 weeks old now. 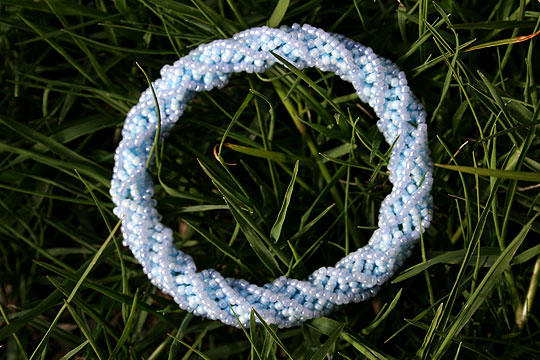 Back to Top
Filed In: Beaded Bracelets, Learning to Bead
Tags:
Cancel Reply