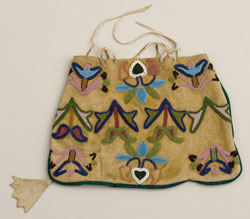 Beadwork is a quintessentially Native American art form, but ironically uses beads imported from Europe and Asia. Glass beads have been in use for almost five centuries in the Americas. Today a wide range of beading styles flourish.

In the Great Lakes, Ursuline nuns introduced floral patterns to tribes, who quickly applied them to beadwork.Great Lakes tribes are known for their bandolier bags, that might take an entire year to complete. During the 20th century the Plateau tribes, such as the Nez Perce perfected contour-style beadwork, in which the lines of beads are stitch to emphasize the pictorial imagery. Plains tribes are master beaders, and today dance regalia for man and women feature a variety of beadwork styles. While Plains and Plateau tribes are renowned for their beaded horse trappings, Subarctic tribes such as the Dene bead lavish floral dog blankets. Eastern tribes have a completely different beadwork aesthetic, and Innu, Mi’kmaq, Penobscot, and Haudenosaunee tribes are known for symmetrical scroll motifs in white beads, called the “double curve.” Iroquois are also known for “embossed” beading in which strings pulled taunt force beads to pop up from the surface, creating a bas-relief. Tammy Rahr (Cayuga) is a contemporary practitioner of this style. Zuni artists have developed a tradition of three-dimensional beaded sculptures. 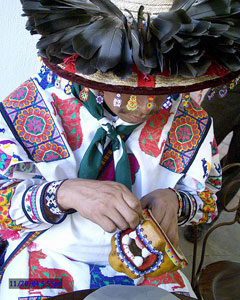 Huichol Indians of Jalisco and Nayarit, Mexico have a completely unique approach to beadwork. They adhere beads, one by one, to a surface, such as wood or a gourd, with a mixture of resin and beeswax.

Most Native beadwork is created for tribal use but beadworkers also create conceptual work for the art world. Richard Aitson (Kiowa–Apache) has both an Indian and non-Indian audience for his work and is known for his fully beaded cradleboards. Another Kiowa beadworker, Teri Greeves has won top honors for her beadwork, which consciously integrates both traditional and contemporary motifs, such as beaded dancers on Converse high-tops. Greeves also beads on buckskin and explores such issues as warfare or Native American voting rights.

Marcus Amerman, Choctaw, one of today’s most celebrated bead artists, pioneered a movement of highly realistic beaded portraits. His imagery ranges from 19th century Native leaders to pop icons such as Janet Jackson and Brook Shields.

Roger Amerman, Marcus’ brother, and Martha Berry, Cherokee, have effectively revived Southeastern beadwork, a style that had been lost because of forced removal from tribes to Indian Territory. Their beadwork commonly features white bead outlines, an echo of the shell beads or pearls Southeastern tribes used before contact.

Jamie Okuma (Luiseño–Shoshone–Bannock) was won top awards with her beaded dolls, which can include entire families or horses and riders, all with fully beaded regalia. The antique Venetian beads she uses can as small as size 22°, about the size of a grain of salt. Juanita Growing Thunder Fogarty, Rhonda Holy Bear, and Charlene Holy Bear are also prominent beaded dollmakers.

The widespread popularity of glass beads does not mean aboriginal bead making is dead. Perhaps the most famous Native bead is wampum, a cylindrical tube of quahog or whelk shell. Both shells produce white beads, but only parts of the quahog produce purple. These are ceremonially and politically important to a range of Eastern tribes. Elizabeth James Perry (Aquinnah Wampanoag–Eastern Band Cherokee) creates wampum jewelry today, including wampum belts.

Back to Top
Cancel Reply