My first beading project ever — The Beaded Stick! 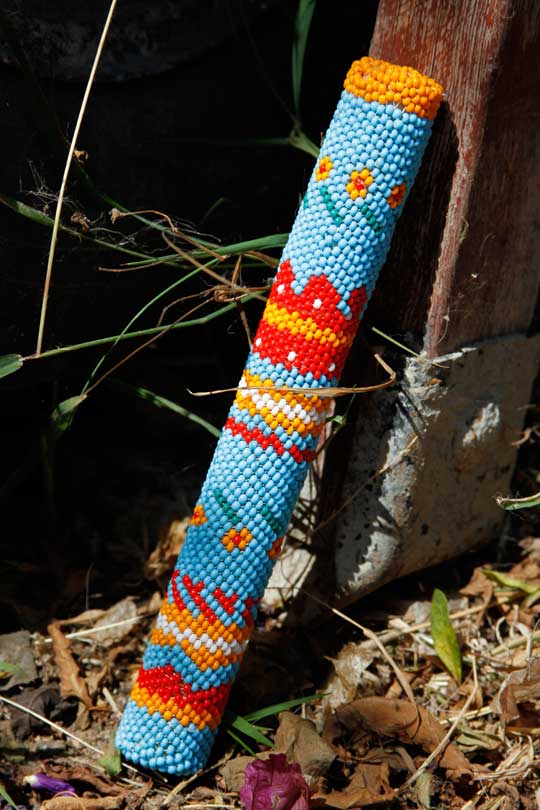 Digging through my beading stuff, unfinished projects etc. I came upon my very first beaded object, the Beaded Stick!

Years ago my Russian friend Lena had a coworker, a Native American lady, who invited her and her daughter, Anya, about 7 years old at the time, to join an annual Native American celebration given by La Jolla Indian tribe on its reservation on Mt. Palomar, North-East of San Diego. Lena invited me, I dragged my husband Raoul along. We had tents, and the tribe provided food and entertainment.

One weekend a year the tribe extends its hospitality to share its history and traditions with its members and outsiders. It was one of the most interesting and wonderful things we have ever attended. The tribe members were very welcoming and caring. It was free of charge and really gave us a glimpse of the life in a small nation.

The food was fantastic too. The tribe served breakfast, lunch and dinner potluck style under the ancient oak trees. There was even such exotic fares as  grilled rattlesnake for the brave to try.

The culmination of the food scene was an enormous wild pig roasted in the pit dug right there in the ground. A bunch of enthusiastic tribal man came together to dig the pit, put the pig in, cover it with leaves and tend the smoldering  fire for hours. It took hard work and expertise, but it looked like they thoroughly enjoyed it. The pig was delicious!

La Jolla tribe is a Bear tribe. First night at the campground we were treated to the tribal Dance, where men of the tribe wore bear hides and went around the fire led by a Medicine Man to the sound of intense drum beats. It lasted about an hour and and grew more intense as the dancers seemed to progress into an altered state of consciousness. The young men sort of became bears…

My girlfriend and her daughter didn’t go to the Bear Dance. They stayed in the tent and tried to get some sleep. Bad idea. The drumming and the growling and the stumping carried pretty far. Inside the tent the girls were paralyzed with mysterious  fear.  They were too scared to get out to join everybody by the fire, since there was some distance to walk in complete darkness, while no doubt  imagining horrible creatures lurking in the pitch black madness behind the trees. But it was equally if not more terrifying to stay inside, easy prey for the same horrible creatures, in case they fancied to come close to sniff around. The girls just wanted that drum beat to stop. As we had fun, Lena and Anya endured one of the most terrifying experiences of their lives.

Another great thing was a sweat lodge.  It was a large  pretty well insulated tent with hot stones placed in the center. The people, maybe 20 to 25 of us, hovered around to the sides of the tent.

I found there is a sort of ritual followed at the lodge. As you enter, crawling in on all fours, you were expected to greet the people already inside the tent with the words “And all my relations…,” meaning that you represent your whole clan, all your relatives, dead and alive. Always. A totally different way of thinking of oneself, not so much as a separate entity, free, unique and unattached, but as a member of your community, your family. Want it or not.

In the smoldering heat inside the tent, each participant got a chance to speak, give thanks, express concern to the rest. It was a very peaceful and centering ceremony.

However, the heat from the stones was so intense that it made you almost lose it. To not pass out, we were told to lay flat on the ground. Strangely indeed, the ground was cool and comforting. Needless to say, I spend most of my time flat on my stomach.

When I crawled out of the lodge at the end of the ceremony, I was covered in mud head to toe. I mean dripping with sweat, red-faced, clothes soaked through with perspiration, and dirty and mud smeared all over my hands and face. Not for the faint of heart, the sweat lodge.

But back to the beading…

In the afternoons, the tribe had some workshops set up, mostly for kids: native crafts, such as dream catcher making, leather medicine bag sewing, animal hide curing, and yes! bead weaving.

As I was wondering around the tables, I tried this and that. I made a little cute medicine bag, then a dream catcher; and gave both items to Lena’s daughter. Made her day.

I tried curing hide too. But it turned out that the magical substance smeared onto the hide to make it soft and pliable was liquified cow brains. I’m not squeamish in the least, but the brain goo emitted a particular smell, slightly putrid, faint wet-doggie… It just made my stomach turn. I had to bow out or I was going to be sick.

And then I reached the beading table…late! The Native American instructor was through explaining the project, turning a beaded stick about 2 inches long into a cute little key chain. The students – all kids! – were dutifully stringing and sewing. I expressed my desire to join the fun, but the teacher showed no enthusiasm whatsoever. I was tardy for the party. I told the teacher that I’d need no special instructions; I’d learn sort of by osmosis.  Hey, two college degrees should count for something at the table filled with 5 to 10 year-olds! But the teacher replied that she was fresh out of  sticks, which were prepared ahead of time, collected, sorted, cut into 2 inch peaces, stripped of bark, and set with an eye hook inserted on one end to turn them into key chains.

I am a sensitive person. I can feel when I’m not wanted.  Normally such an exchange would for sure drive me away, but I really wanted to learn to bead around a stick.

I looked around. The ground was littered with all matter of sticks. No joke, we were in the forest! Nothing cut small and stripped of bark and regular shaped though…

It’s not in my nature to just give up. I picked up one more or less regular-shaped round stick. It was, however, about ten times the length of the teacher’s sample. That would make a cross between a key chain and a police night stick. I had no time to trim it. I just stripped it of bark and presented it to the table, victorious. Now there was no legal obstacle between me and the stick beading.

We were taught what I now know to be a tubular peyote stitch with a variety of size 11 bright color beads. I enjoyed the project, but in time the kids were running to show their moms finished key chains, I was not even a quarter done with my monster…

I finished it in my own good time, about three years later. The stick feels so good in my hands when I pick it up. Makes me remember the campground, the cow brains, the heat of the sweat lodge, the cool earth, and the Dancing Bears…

What a great weekend!

I don’t know if the La Jolla Tribe does that sort of gathering anymore. In 2007 a massive wildfire swept through that exact area. I haven’t been there since. But I’m very grateful to the tribe for their warmth and hospitality. And for introducing me to the needle, thread and bead combination!

Back to Top
Filed In: Learning to Bead
Tags:
Cancel Reply