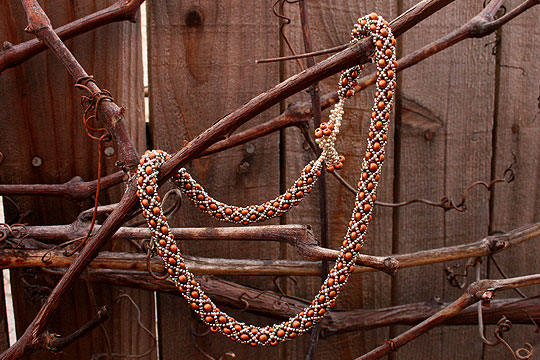 No it is not a snake! This is the piece that inspired me to start beading seriously.

Pamela Aronoff, a serious and very creative beader, gave me a necklace as a gift. I was so stunned by it, that I thought I wanted to make one myself. Since Pam lives 2 hours north from me, I went looking in local bead stores with my precious necklace in hand, asking if anybody could tell how I could make one. At this point I had not even a beading needle to my name. My local beadstore, the Black Bead, is more of a stringing place. The salesgirls there could not really help me. But they sold me my first batch of supplies: some needles, thread, Check size 11 beads, and a few old copies of Bead&Button magazine, half-price.

But then I discovered The Shepherdess! The real beadstore that actually had a class schedule and a once-a-week beading group going! Oh boy! Cookie, the owner, was great. She herself is an accomplished beader, knitter, quilter, and her metal jewelry is off the wall! Oh, and did I mention? she carves too. She herself did not know about my necklace, but she suggested I come to the beading group and talk to the instructor, Ana Garcia. And here we go. I became a regular at the Shepherdess beading group, took my first beading class from Ana, and realized I love not only the end result but the process of making beaded jewelry itself. I mean I became hooked.

As to the necklace, there is a well-known printed pattern. But we only discovered it after one girl from the beading group, Marie Jennings, kind of reconstructed it herself by just looking at the piece. Her’s started a bit differently than the original, but did she impress me!

So, the pattern is in Bead&Button, issue 87 from October 2008. The name is Web of Silver. However, Pam’s design that you see here is thinner (3 beads instead of 5). But you can figure it out from the pattern at Bead&Button. 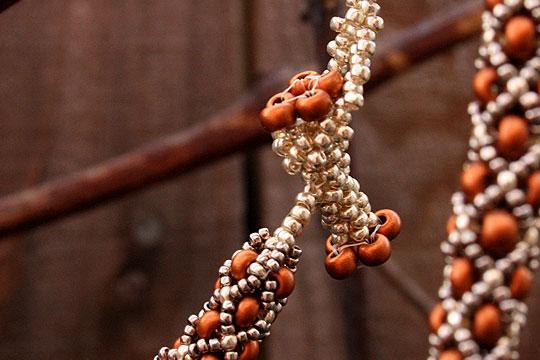 Had to figure out the toggle clasp on my own though. Took 3 days from my life…

Back to Top
Filed In: Beaded Necklaces, Learning to Bead
Tags:

There are 3 Comments to "Fence Snake Necklace"